Breakfast is the most important meal of the day.

It’s also the most delicious.

So delicious that people even love having breakfast dishes for dinner.

But how do you choose between all the restaurants in our region to decide which one is the best breakfast spot?

The Day asked its readers, and the brackets finally narrowed the options down to four: Noah’s in Stonington, When Pigs Fly in Waterford, Jake’s Restaurant in North Stonington, and Somewhere in Time in Mystic.

And the winner, as voted by The Day’s readers … Jake’s in North Stonington!

The Day’s writers went to the four finalists, and here’s what they have to say about the experience.

Should I get something a little more unusual, like an omelet with artichoke hearts? Or should I go seasonal and get a pumpkin specialty? Was I feeling sweet — and in need of a gingerbread waffle — or savory?

I ended up choosing the “Best Eh-vah House Made Hash and Eggs” ($12.75, with two eggs and toast with house-made jelly), because it was advertised as the house specialty, and the 14-hour slow roasted corned beef hash sounded particularly appealing.

But I was also taken in by a box at the top of the menu: “Try our cinnamon buns! It’s a great way to start off your meal. We smother em’ in icing and top em’ with melted butter. Baked fresh daily.” So, I ordered one of those as well.

Have you had the experience of taking a bite of food and it so exceeds your expectations that you let out a small noise of delight before you can even realize you’re doing it? Well, that’s what happened for both the cinnamon bun and the beef.

The cinnamon bun was flatter than your typical cinnamon bun, but warm, flavorful and crispy around the edges. The corned beef was remarkably tender.

What struck me about Jake’s was how well they did breakfast staples. It’s not like I was ordering something fancy or weird like a duck eggs Benedict with truffle aioli. (I just made that up.) I’ve had cinnamon buns and corned beef hash before, but Jake’s made both better than I thought they could be.

I got my food about 15 minutes after ordering, and the servers were incredibly friendly.

My wife and I shucked our raincoats and settled into a warm, cozy booth at Noah’s Restaurant, the Stongington mainstay in the heart of the borough. Tourists were mostly absent on a recent cloudy fall morning, and we shared the comfy dining room with a melange of locals. (Hey, there’s my sister-in-law Liz and her friend Mary!) But never mind all that. We were there for breakfast and hot coffee. We weren’t disappointed.

So, I’ll cut right to the important stuff.

My choice, the Noah’s Omelette ($11.50), was packed — but not overloaded — with a savory collection of bacon, tomato and Cabot sharp cheddar. The crispy-on-the-outside home fries were the perfect textural accompaniment to the fluffy egg ensemble. The Frank’s hot sauce I habitually request added a nice kick but really wasn’t necessary. And since The Day was picking up the check: a side order of nicely spiced grilled Portuguese chourico ($3.50). Good call on my part!

Irene flipped the menu over to the breakfast specials. Her pick: The Griddler ($10). Two over-hard eggs, griddled “luxury loaf,” cheddar cheese and griddled tomatoes on an English muffin (or in her case, rye bread). “Luxury loaf” may sound a bit questionable, but this 1/4-inch thick slab of what our waitresss described as “kind of a German bologna” was truly luxurious. Another excellent call!

As we left the warm comfort of Noah’s, we pondered our Saturday. Lot’s of chores on the list. But first, a nice comfort-food induced nap.

It’s a sign that a breakfast spot is a spectacular one when you roll up on a Sunday morning and there’s a line to get in.

So it was this past Sunday when two friends and I arrived at When Pigs Fly. Folks hung out on the steps and patio out front as they waited for their names to be called for an inside table, but it really didn’t take long. We decided to sit outside, since we could get a spot there more quickly — and because the weather was downright springlike.

We ordered a range of dishes to share: one sweet offering (banana bread French toast, $10), one savory (a breakfast burrito, $10) and one special (omelet with sweet Italian sausage, peppers, onions, tomatoes and mozzarella. $14).

The burrito was my fave. The eggs inside were fluffy and just moist enough, and they rightly took center stage in the amalgam of sausage, black beans, salsa and cheddar inside the wrap. Wraps can often be an underwhelming afterthought in breakfast burritos, but this one was particularly good. Oh, and it all came with home fries.

The banana bread French toast was scrumptious, too, and we drizzled syrup over the slabs of bread that were topped with powdered sugar.

The omelet was tasty, although the ingredients seemed to have slid around; one of us ended up with most of the sausage — and, yes, I was jealous because the few slices sausage I did get in my portion were delectable. Accompanying the omelet was a leaning-tower-of-Pisa pile of sourdough bread and home fries.

And a special note about the wait staff: so good! Nice and welcoming and helpful and efficient.

By the way, Somewhere in Time, which was another of the final four in The Day’s breakfast madness bracket, is the sister restaurant of When Pigs Fly. Which brings us to …

This breakfast/lunch spot is in a non-descript strip mall, but inside there are some surprises.

First, the vibe is 1950s, right down to the Formica tables and the retro plates with cat pictures on the walls.

And while the menu has the expected eggs, breakfast sandwiches and pancakes, the specials board is loaded with much more interesting offerings. How about pumpkin pancakes with walnuts and caramel? Or sweet potato home fries topped with eggs and cheddar served with sunflower toast and hash?

I kept it simple with French toast and home fries, both of which hit the spot and made lunch unnecessary.

While waiting for your breakfast, you can pour your own coffee and listen to the regulars chat about the pandemic, politics and the World Series.

Wed Nov 3 , 2021
Open a restaurant’s menu and you’re likely to fall in love. It might be because you immediately spotted that tantalizing crème brûlée French toast in the upper righthand corner highlighted in a cheery orange box; it might be that the font choice drew you in. Or it could be a […] 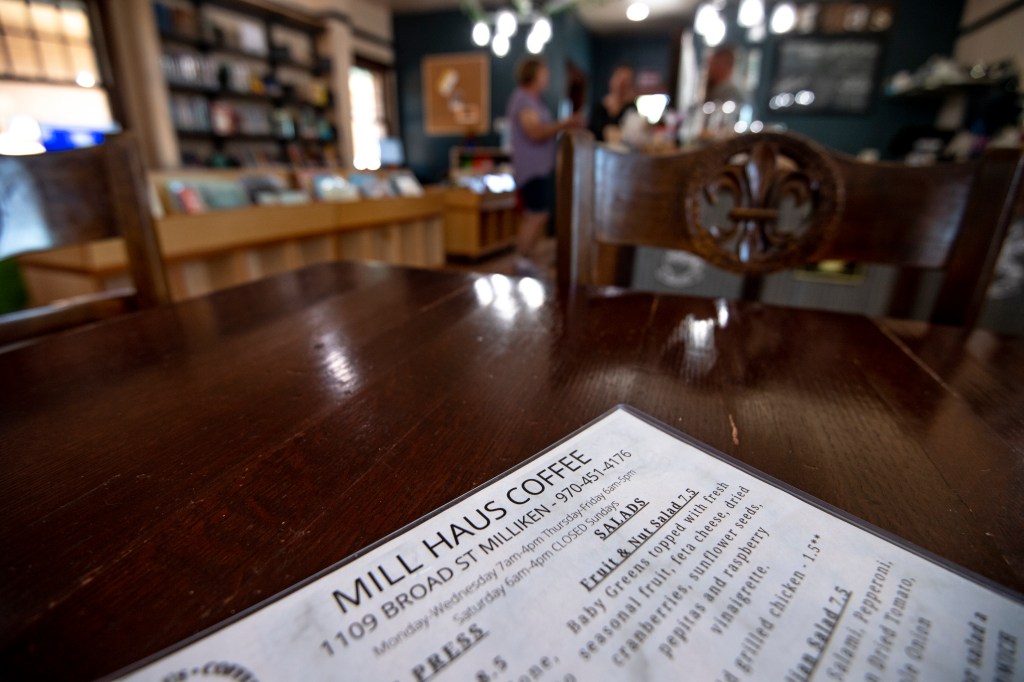