Latkes are a Jewish tradition, but they’re also yummy treats that can be enjoyed year-round.

Sometimes called potato pancakes, they are usually made to celebrate Hanukkah, and are also a part of Polish, German and other Eastern European cultures.

Davis, who owns a personal chef business called “The Flavorful Fork” launched in 2010, taught participants how to make potato pancakes with a bit of a twist. She added fresh herbs and cheese to the recipe. The class went over tips for achieving latkes that are “soft on the inside and crispy on the outside.”

She says there are several keys to making great latkes, which traditionally include a potato, onion, an egg and one other binding agent such as matzo meal, flour, bread crumbs or potato starch, she said.

More:From bakeries to farm markets, here is where to get your holiday pies in South Jersey

“To start, you have to use the right kind of potato,” Davis said. “Russet potatoes are really the best option to use. They tend to be a little drier than something like a Yukon Gold potato, for example, so they will brown up better and be crispier.”

Davis points to Russet’s higher starch content, which helps them stick together nicely.

“Then, tip two, depending on which person you ask, there’s a lot of debate on whether you should hand grate the potato or whether you should use your food processor,” Davis explains. “The hand grater will kind of give you less uniform pieces and will also make kind of a denser potato latke in the end. The food processor will be kind of more uniform pieces and it’s a bit lighter pancake. If you ask some of the older folks the will tell you, you have to hand grate.”

A big challenge, she said, is that a lot of moisture naturally comes out of a potato and onion. So you have to wring out the potato mix thoroughly or “the potato pancakes are not going to crisp up and will be heavy and soggy.” Davis uses a cheese cloth and a bowl. When you dump the water out, there’s potato starch on the bottom, which she uses to help bind the potato pancake together.

Then fry it in a pan with plenty of oil.

“Now’s not the time to worry about being healthy,” she said with a laugh. “You have to put a good layer of a hot heat oil, like a safflower oil or an avocado oil, any kind of vegetable oil … You want to make sure when you’re frying it in the pan that the potato pancake is halfway covered with the oil so you’re getting a really nice, crispy outside. The goal is crispy outside, soft inside.”

You also need a good quantity of salt to get a good flavor.

Davis initially worked in the IT industry for more than 15 years but always loved to cook and entertain. She left the industry to start her business.

She goes to customers’ homes and uses their kitchen to cook, bringing the food and equipment needed. She also does in-home catering for smaller groups.

“It’s been wonderful,” she added. “It’s been a very flexible business for me and I get to wear a lot of different hats throughout the week.”

Here are some places to get latkes or potato pancakes:

With three locations in New Jersey, the place known best for its omelets also serves up those potato pancakes. You can get them as part of a meal, like along with your omelet of choice, or you can buy them individually.

“We have been making this type of potato pancake for over 50 years,” says Ted Kopsaftis, Amy’s Omelette House owner and operator. “This is the same recipe that my father made in a diner he owned when I was a child.  We always serve them with sour cream and applesauce.  We sell them individually for $2.75 or you can get a side order that includes thee potato pancakes and bacon for $10.95.  We also have many omelets that include potato pancakes or are stuffed with a potato pancake.

“We don’t typically sell any more than normal this time of year.  No matter how many you would like, the price is $2.75 a piece which includes the sour cream and applesauce.”

On a weekend stay or summer vacation in Cape May, where to eat breakfast may be the hardest question you have to face.

While a few other establishments in the historic Shore town may get more publicity, Dock Mike’s is a bustling, expansive and comfortable place to dine — whether you choose inside, on the porch or on a large patio. There is a second location in Sea Isle City.

This place knows its pancakes, and there are seemingly endless varieties: piña colada. buckwheat cinnamon-raisin, pecan, Jersey corn, peanut butter-chocolate chip and even sweet potato, just to get started.

If you love potato pancakes, you know you won’t always get the opportunity to enjoy them and such a chance should not be squandered.

Breakfast entrees start at $3 and the large pancakes come in stacks of three.

Come prepared as Dock Mike’s only takes cash, although there is an ATM on site.

A staple in the community, this Jewish delicatessen has been around since 1982.

“We make the potato latke,” Della Fave said. “We create the product and we freeze it. We stack them in bags. We take them out and throw them in our deep fryer and then cook them up in the oven. We serve sour cream and apple sauce with them.

“Our biggest sellers are matzo ball soup, our corn beef specials, pastrami Rubens. We do sell a lot of latkes and a lot of cheese blintzes. They’re almost like crepes. We serve that also with sour cream and people also like a cherry sauce or strawberry sauce on the side with that.”

They’ve been in business since 1968. And they sell plenty of latkes.

“We sell a lot, a great amount,” said owner Joanne Schley. “We sell them all year round and people know how good they are because we make them homemade.”

The eatery is located in the Roberts Mill Shopping Center off Church Road.

Soon to be in both Collingswood and Haddonfield, this gourmet market has quickly established a devoted clientele for its butcher counter, fresh seafood offerings, gourmet provisions and much more.

Prepared foods are a big reason to stop by, including pot pies, eggplant meatballs and short rib meatloaf. And, during the holiday season, latkes.

They are $2.99 each and you’ll find plenty of side dishes to tempt you if you want to bring home dinner.

The Haddonfield location is tentatively set to open Dec. 8.

You can have your cravings for latkes any time you like, as this beloved New York-style deli is open seven days a week.

Potato pancakes are featured on the appetizer menu, two for $5 or four for $8, and come with sour cream or apple sauce. They also are among the options for sides for many Traditional Favorites entrees such as brisket, chicken pot pie, stuffed cabbage, knockwurst and much more.

If you missed out on Oktoberfest this year, you can make up for it a bit at Sebastian’s.

Just remember, it’s BYO beer. But the potato pancakes are a plentiful.

This German-American restaurant is plenty festive, as the inside is packed with Hummels, beer steins and dolls.

But we brought you here to talk potato pancakes. Those are prepared with onions and spices, and are served with apple sauce and sour cream. You can choose from three pieces for $9; four pieces for $11 or six pieces for $16.

Stacks is all about the pancakes. You can tell that by the name, right?

Located where Perkins Restaurant once was along Route 38 West, Stacks serves up more than just breakfast foods, such as regular pancakes.

Customers can get a potato pancake platter, which comes with potato pancakes, two eggs, a choice of bacon or sausage with sides of applesauce and sour cream for $10.99 or they can order them a la carte.

That comes with three potato pancakes with bacon or sausage, apple sauce and sour cream and costs $8.99.

A restaurant rep says that “potato pancakes are a popular seller…We cook them made- to-order and they are a popular dish year-round.”

The restaurant offers indoor dining, takeout and delivery with DoorDash and Grubhub.

OK, so a Polish babcia or a Jewish bubbeh may argue that what is served at this cozy cafe in a former train station are not really potato pancakes, but more like squat, housemade tater tots.

Who are we to argue with grandma? But if you don’t like the crisp and savory mini pancakes served here with breakfast, you can pass them right over here.

They are worth including in our list, if only because anything you’ll eat with them here is equally worth the trip. We like ours sidling up to a plate of eggs Benedict with some sliced avocado.

Come for the potato pancakes, stay for the beignets and more cafe coffee.

Mon Nov 22 , 2021
It’s our objective to supply the finest, most healthful Chinese language eating expertise in Richmond and we uarantee it! In complete grain foods, the higher fiber content successfully displaces a few of the starch parts of the flour. Since sure fibers have no food energy, this leads to a modest […] 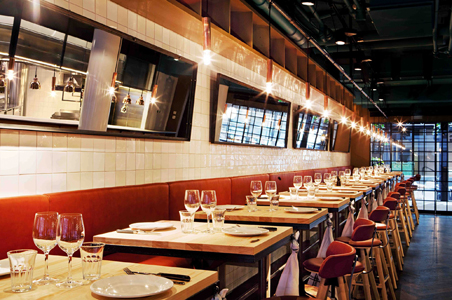