Among the many novel concession foods that debuted at Dodger Stadium last year — there was a pineapple-stuffed link called a Dodger sausage, and a deconstructed California roll served in what looked like an oversize baseball — none was as surprising as the vegan al pastor trompo that appeared near the third base pavilion in late September.

The trompo, a tall, vertical spit holding what at first glance appeared to be a spinning stack of chile-slicked pork, was part of a Dodger Stadium “vegan takeover” by Masataco, a Mexican restaurant in Whittier with a largely vegan menu.

To make the dish, chef David Fuerte brined celery root for 24 hours in a vinegar solution before it was sliced thin, pierced onto the trompo and then marinated in a garlic-heavy chile marinade for another full day. When it was time, the glowering, thickly sauced vegetable tower was sliced onto fresh corn tortillas that were infused with the flavor of caramelized pineapple. The preparation is so time-intensive that Masataco prepares the vegan al pastor trompo only for special or private events.

The tacos — tangy, bright mouthfuls smoldering with heat — sold out before the seventh inning.

It was the first time in Dodger Stadium’s nearly 70-year history that a local vegan Mexican restaurant was invited to take over a stadium concession stand, an indicator of the rising popularity of plant-based Mexican cooking in Los Angeles.

“Dodger Stadium is the heart of L.A.,” Fuerte said. “It said something about how big this whole movement has become.”

Across the country, restaurateurs and chefs are reinvigorating familiar dishes of Mexican and Mexican American cooking for a new generation while also nudging the cuisine closer to its pre-Columbian heritage, an omnivorous but plant-heavy diet rooted in corn, beans, squash, wild greens, cactus, nuts and chiles.

The epicenter of the Mexican vegan explosion is Southern California, where in the last several years, weekly vegan food fairs in cities such as Los Angeles, Long Beach, Santa Ana and Ontario have been meeting a growing demand for plant-based Mexican vegan cooking.

Mexican vegan cooking has its own cultural underpinnings, but its recent popularity overlaps with the ascendance of veganism around the globe. Influential documentaries like “Forks Over Knives,” which espouse the health benefits of whole-food, plant-based eating, compounded with worries over the ethics and safety of meat production and the environmental effects of consuming meat, have inserted veganism into conversations about the standard American diet. The advent of the Impossible Burger and Beyond Meat, plant-based meat substitutes that are now sold at fast-food outlets and grocery stores across America, have made plant-based eating cheaper and more accessible than ever.

Latinx vegans are spurred toward plant-based diets for a whole constellation of reasons, but health concerns rank high — nearly every chef I interviewed for this story cited concern over diabetes, high blood pressure and cardiac disease, which affect U.S. Latinx communities at disproportionate rates.

Loreta Ruiz, the chef and owner of La Vegana Mexicana, a food stall tucked into a colorful hallway of downtown Santa Ana’s 4th Street Market, was compelled to go vegan after her daughter, also named Loreta, was diagnosed with an autoimmune disorder that forced her to eliminate meat, soy and gluten from her diet. In a show of support, the rest of the family adopted a vegan diet.

A Mexico City native and former diplomat with a lifelong interest in healthy eating and home cooking, Ruiz began to sell Mexican vegan dishes at Orange County pop-up events and farmers markets in 2017.

In February 2019, she and her two children opened La Vegana Mexicana. The menu leans into the dishes Ruiz grew up eating: the chile-dipped sandwiches called pambazos; mole-filled tamales; and “chicken” tinga made using shredded vegetables.

Business was robust at the start of the year, but then La Vegana Mexicana — like restaurants across the state — was forced to shut its dining room amid the coronavirus pandemic. Ruiz switched to takeout-only instead, but business fell by 90%.

A self-taught cook with a fascination for the chemistry of flavor, Ruiz has used the downtime to tinker with her recipes for various vegan cheeses, which are now sold at the restaurant. She previously spent a year perfecting a recipe for vegan menudo, a dish that uses four types of mushrooms (shiitake, oyster, white and snow) to approximate the chewy, gelatinous texture of pancita.

“Food is often about memories and nostalgia, and you can’t maintain a plant-based diet, or any diet for that matter, if you’re not eating food that you really enjoy,” Ruiz said.

“The biggest challenge we face is, how can we combine plant-based eating with traditional Mexican flavors?”

Masataco’s Fuerte, whose restaurant has been offering tacos, bulk dry goods and KN95 face masks during the pandemic, relishes the challenge of making vegan dishes with widespread appeal.

He was drawn to what he calls “clean eating” after his mother was diagnosed with breast cancer. His tacos are detailed, layered arrangements: a “carnitas” taco made with varisized marinated mushrooms are meaty and chewy, and rajas are sprinkled with grilled corn, zucchini and crushed nuts, and drizzled with vegan crema.

“The best feeling is when a guy comes in here with his vegan girlfriend and then comes back again the next week because he loved the food so much,” Fuerte said.

Jocelyn Ramirez, the chef and owner of Todo Verde, a vegan catering company that was a fixture at Smorgasburg before the weekly food festival went on hiatus due to the coronavirus, tapped into her grandmother’s mole recipe to make one of her most popular offerings: a taco filled with seared jackfruit in a creamy, fragrant pipian verde sauce made from a blend of toasted pepitas, pistachios and charred poblanos.

Like many vegans of color, Ramirez sees plant-based cooking as part of a larger political and cultural framework.

Ramirez, a former college professor with a background in social justice issues, cites Luz Calvo and Catriona Rueda Esquibel’s “Decolonize Your Diet” as a foundational text for a new generation of Latinx vegans. The publication of the book in 2015 helped galvanize a generation interested in plant-based cooking.

In the book, Calvo and Rueda Esquibel advocate for a diet that is rich in plants indigenous to the Americas but flexible enough to accommodate many modes of eating.

Five years ago, it was not an easy book to get published, Rueda Esquibel said.

“We were constantly being told things like Latinxs don’t buy cookbooks, or you need to write it for the housewife in Iowa, or it’s too niche,” she told me recently via email.

Even as Mexican vegan cooking takes off, some vegan chefs say rejecting meat can be isolating.

Brenda Cruz, the kitchen manager at Todo Verde, grew up in a beef-loving household in Yuma near the Arizona-Sonora border.

Many parts of Mexico, including norteño states such as Sonora, have historical ties to ranching and meat consumption; for some, eating steak, pork and chicken is part of a larger regional identity.

Yuma recently got its first Sprouts grocery store, a lifeline when Cruz has to procure ingredients to make her own meals during visits. In her family, as throughout much of Mexico, carne asada connotes not only grilled steak but also a communal gathering.

“Every weekend my family has pollo and they have carne asada. It’s tied to family time,” Cruz said.

It’s isolating to be teased by relatives who don’t “get” plant-based eating. So what do you do when embracing your ancestral heritage diet shuts you out from the very culture you’re trying to get closer to?

“There is a thing where people are bound together by eating the same thing. So if you declare yourself a vegetarian and aren’t eating the same food as your familia, you can be perceived as different,” she said. “To them, it’s like you’re refusing your heritage food.

“But is the party really about the carne, or is it about the family dynamics?” she said. “So you bring ceviche de coliflor [cauliflower] and everybody in your family makes fun of you. And then they eat it all and ask you to bring it every week.”

Sun Jun 28 , 2020
Dominic Valente/Hulu I’m an immigrant—and I’m not alone. Padma Lakshmi opens each episode of her new Hulu series Taste the Nation with that mantra, and it’s one that’s powering the food author and TV host during the Trump administration’s all-out war on immigrants, from the “Muslim ban” and separating children […] 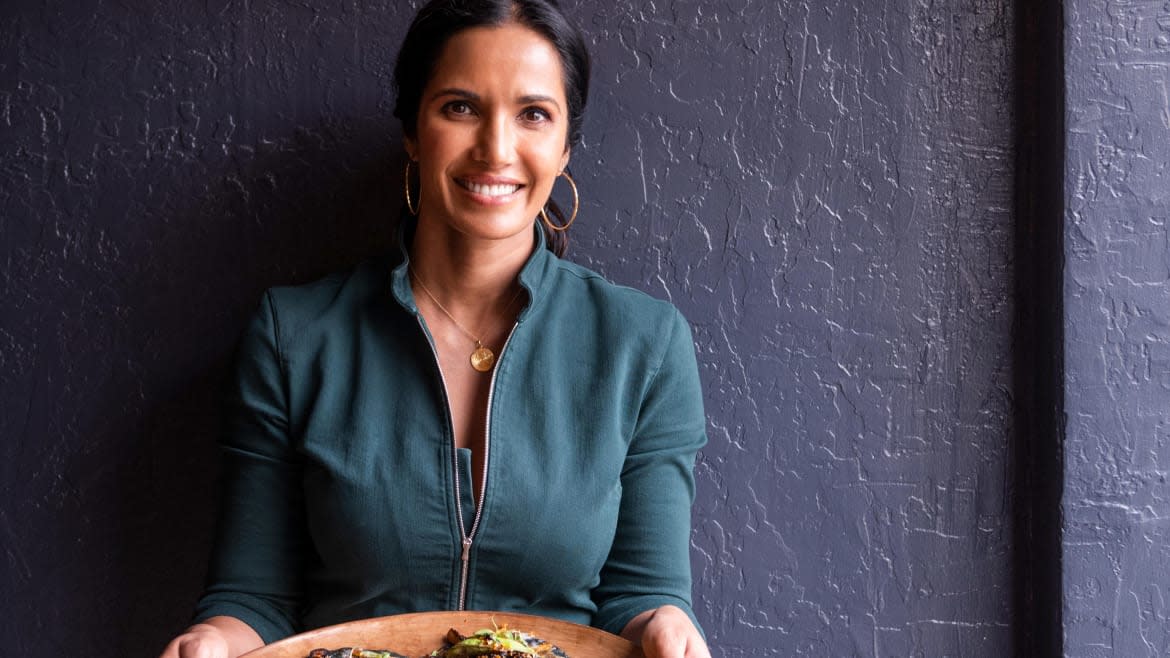