California Gov. Gavin Newsom survived a historic recall election Tuesday, winning a vote of confidence during a COVID-19 pandemic that has shattered families and livelihoods and tested his ability to lead the state through the largest worldwide health crisis in modern times.

National television networks called the election for Newsom shortly after the polls closed at 8 p.m. Surveys of voters leaving the polls had shown the recall headed for defeat and Elder leading the field of 46 candidates vying to succeed Newsom.

The election provided California voters an opportunity to judge Newsom’s ability to lead the state through the COVID-19 pandemic, a worldwide health crisis that has shattered families and livelihoods.

The recall offered Republicans their best chance in years to take the helm of the largest state in the union, though Newsom and the nation’s leading Democrats, including President Biden and Vice President Kamala Harris, portrayed the campaign to oust him as a “life and death” battle against “Trumpism” and far-right, anti-vaccine activists.

Conservative talk show host Larry Elder emerged during the campaign as the favorite among the 46 candidates on the ballot hoping to become the governor, though a victory would become meaningless if a majority of Californians vote to keep Newsom in office. If elected, Elder would become the first Black governor in state history.

Newsom spent part of election day at an anti-recall rally in a San Francisco union hall, and warned supporters about the consequences to California’s economy and the public health of its nearly 40 million residents if he was recalled and replaced with Elder, who has vowed to repeal the state’s mask and vaccination mandates.

“California has outperformed Florida, Texas, Indiana, the United States as a whole in not only health outcomes, but economic outcomes,” Newsom told reporters. “Our economy contracted at a more modest rate than those states.”

Newsom also criticized both Elder and former President Trump for saying Tuesday’s election was rigged, calling those unfounded allegations a threat to democracy and continuation of the “big lie” that the 2020 presidential election was stolen from Trump.

“This election fraud stuff is a crock; it’s shameful. And when I say that, I mean that,” he said. “Guys like me come and go. We’re a dime a dozen, politicians. Quite literally a dime a dozen. Its about our institutions. It’s about this nation. It’s about trust and confidence.”

For Newsom, the election capped an extraordinary eight-week fight for his political survival that came less than three years after he won the governor’s office by the largest margin in modern history.

Newsom’s campaign to defeat the recall effort began on an upbeat note, with the governor touting that California was “roaring back” thanks to lower COVID-19 infection rates in the state and efforts to ensure residents got vaccinated. The state’s restrictions and shutdowns were lifted. Baseball stadiums overflowed with fans starting in June, people were dining inside restaurants and, Newsom promised, public schools would be open for the new academic year.

Newsom and his political allies had prevented any prominent Democrats from jumping into the field of replacement candidates, eliminating a credible alternative for left-leaning Californians who may have soured on the governor.

But in late July, just after the recall election was officially certified for the ballot, cause for concern surfaced for Newsom: A poll showed that likely voters in California were almost evenly split over whether to toss the governor out of office, a dire sign in a state where Democratic voters outnumber Republicans almost 2 to 1.

Political scientist Mindy Romero, director of USC’s Center for Inclusive Democracy, said the lingering aftereffects of Newsom’s COVID-19 policies probably made some voters who supported him in the 2018 election indifferent this time around.

She said they held Newsom “at least partially responsible” for the government-mandated restrictions that devastated businesses and forced schoolchildren to stay home in distance-learning programs. Under Newsom’s watch, the state also paid out billions of dollars in fraudulent unemployment benefits while at the same time millions of out-of-work Californians with legitimate claims faced frustrating, lengthy delays in receiving their payments.

Romero said Newsom’s most costly mistake came in November when recall supporters were struggling to gather enough petition signatures to qualify for the ballot. Newsom attended a lobbyist’s birthday party at the upscale French Laundry restaurant in the Napa Valley after he had pleaded with Californians to stay home and avoid multifamily gatherings.

Recall proponents seized on that, criticizing Newsom as an out-of-touch elitist and hypocrite who thought he was above the rules he imposed on other Californians. Romero said that message was “simple and intuitive for people to understand.” It appealed to voters across the political spectrum and lingers still, she said.

“This never should have gotten close,” Romero said. “This whole process has damaged the governor.”

Dave Gilliard, one of the Republican strategists leading the effort to oust the governor, said Newsom was in serious trouble up until August. That changed once Elder emerged as the leading contender to replace Newsom as governor.

“He was in bad shape,” Gilliard said. “Once the focus moved away from Newsom and to his opponent, Elder in this case, his numbers improved greatly. He was able to get Democrats interested again in the election.”

Elder was a perfect foil, Gilliard said. The Republican opposed abortion rights and supported offshore oil drilling, anathema to the state’s Democratic majority. Elder has also been a die-hard supporter of Trump, an immensely unpopular figure in California. In fact, Gilliard said, recall proponents pleaded with Trump’s advisors to “convince him to stay out of it,” which was successful until recent days when he started making baseless claims that California’s recall election was “rigged.”

Most consequential, Gilliard said, was Elder’s vow to repeal the Newsom administration’s mandates requiring students to wear masks in public schools and teachers, state employees and healthcare workers to be vaccinated. This at a time when the Delta variant was raging and most Californians supported Newsom’s actions to stem the spread of the coronavirus.

“Elder allowed Newsom to bring Trump back into it, at least Trumpism, when it came to masks and vaccines,” Gilliard said. “When you combine that with the Delta variant, and that people were all of the sudden extremely concerned again about COVID, the timing for Newsom could have not been better.”

At stake was the most powerful elected office in a state of nearly 40 million people, one beset by homelessness, a dire shortage of affordable housing, increases in violent crime and with thousands of businesses that closed or still struggle after statewide shutdowns during the height of the pandemic.

Newsom is the second California governor to have faced a recall vote. In 2003, California voters upset over rolling power outages, budget cuts and a steep increase in vehicle license fees recalled Democratic Gov. Gray Davis from office and elected actor Arnold Schwarzenegger, who remains the last Republican to have served as the state’s chief executive.

By comparison, the 2021 sequel fell flat.

Reality television star and former Olympic decathlete Caitlyn Jenner tried to capture some of the Schwarzenegger magic but did not win over California voters despite her visibility in cable television news coverage.

A small crowd of Jenner’s supporters and campaign advisors assembled Tuesday night at the Stonehaus, an upscale restaurant and wine bar in Westlake Village, ahead of her arrival. Jenner, the most prominent transgender candidate in American political history, had yet to arrive when the polls closed.

Among them was Rev. Grace Wilgefortis Ferris, who had invited Jenner to guest speak on her podcast, “Just as I am.” A Catholic deacon and founder of the Saint Wilgefortis TransMISSION church, Ferris said her bishop warned her that Jenner was very conservative. But Ferris said “I’m just interested in people as people.”

“She’s such an inspiration for the community,” Ferris said.

Trying to, as he put it, make his campaign more “beastly,” Republican John Cox at one point enlisted help from a 1,000-pound Kodiak bear named Tag to drum up interest in his campaign. Neither the bear nor the $7.6 million he poured into the race helped replicate the success he had in 2018, when he won enough voter support in the gubernatorial primary to face Newsom in the general election — only to be trounced.

On Tuesday morning, Cox acknowledged that Elder had “shaken up the race quite a bit.” With a double-digit lead over any other candidate, Elder far outpaced Cox, who was backed by 4% of likely voters leading up to the election, according to the latest UC Berkeley Institute of Governmental Studies poll cosponsored by The Times.

Cox said he hoped the polls were wrong, and repeated his stance that undecided voters would decide the election.

“The important thing is that we vote yes on the recall … doesn’t matter if people select Larry or myself,” Cox said.

Kevin Paffrath, who boasts 1.7 million followers on his YouTube channel, had the highest profile of the little-known Democrats on the ballot, even managing to make it to the stage during one of the candidate debates. Paffrath, who proposed building a pipeline to the Mississippi River to alleviate California’s devastating drought, was expected to have a relatively strong showing in the election, perhaps even challenging the success of Republican Kevin Faulconer, the former mayor of San Diego.

As a fiscal conservative with moderate to liberal positions on social issues, including abortion, immigration and the environment, Faulconer was long seen as the Republican Party’s greatest hope to recapture the governor’s office. But his campaign foundered, in part, because the pro-Trump core of the California Republican Party was solidly behind Elder.

“We have had every obstacle thrown in our path throughout this whole process,” Kiley said from inside Oliver’s Brewhouse and Grill in the small Placer County town of Lincoln, a city he represents in the Legislature. “We’ll see if we overcome the final obstacle here with a win tonight.”

Wed Sep 15 , 2021
The coronavirus pandemic combined with mandatory restaurant lockdowns caused an upheaval in the restaurant industry. Many restaurants couldn’t withstand the shutdowns, and of the ones that could, some failed because of social distancing rules (of which 11 states are still implementing). Restaurants are now bracing for more trouble, as the […] 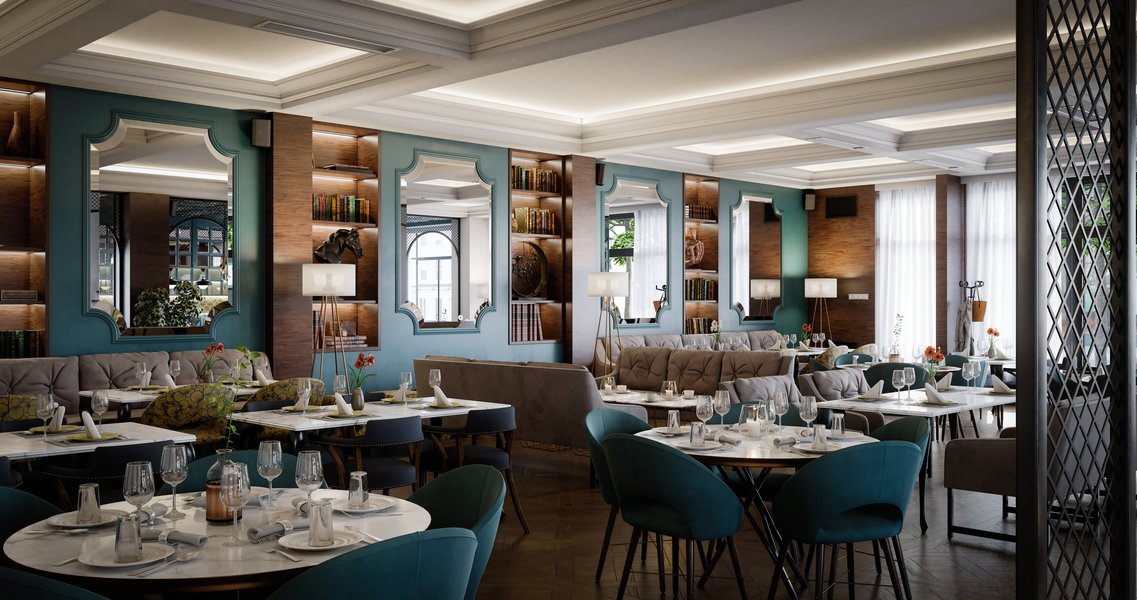