In Europe, these are days of perilous escalation. Fighting has spilled beyond Ukraine into neighboring Russia and Moldova. Today, Speaker of the House Nancy Pelosi said she and a U.S. delegation met with Ukraine’s president, Volodymyr Zelenskyy, and pledged U.S. support until, “victory is won.” Congress is considering $33 billion in aid while the U.S. rushes heavy artillery into the fight. Yesterday, more Russian missiles struck the vital port city of Odesa. Odesa is a major exporter of grain and tonight the head of the United Nations’ World Food Programme tells us the seaport there must be reopened to prevent starvation. The World Food Programme is feeding the hungry in Ukraine while fighting famine around the world.

We traveled to Ukraine and the Port of Odesa, to witness the harvest of war.

Faith draws hundreds to a church in Odesa, a city where, everyday, the war’s evacuees collect 10,000 loaves of hope. They come, wearing the clothes of a previous life, with nothing in their sacks — no job, no home — just a chance to endure another day of war without hunger. Around the corner, those who already had worries enough collect mercy in boxes that feed a family of four for two weeks. Pasta, oil, canned meat. It comes to 38 and a half pounds, so a mom can really use a hand. In Ukraine, the United Nations’ World Food Programme is running hundreds of sites like this.

Scott Pelley: How many people do you fear might be starving in this country?

In Odesa, we spoke with David Beasley, the executive director of the U.N.’s World Food Programme.

David Beasley: You gotta assume that millions are at stake right now. We’re reaching about 2 million already. We hope to scale up to 4 million in the weeks ahead and 6 million beyond that. It’s gonna be dependent upon two things: money and access.

But access has been cut off to the war’s victims in the heavily besieged cities of Eastern Ukraine.

David Beasley: We can’t reach them. We’re blocked. We can’t get into the besieged cities like Mariupol, Mykolaiv, and Kherson, and I could go on and on. They have to be starving.

Scott Pelley: Why would the Russians not allow food to be delivered to starving people?

Evil, that Andrii Khludov has witnessed.

Khludov’s family escaped this. Their hometown of mariupol had 400,000 residents. Russian forces couldn’t take it so they are shelling Mariupol to ruin.

Andrii Khludov (translated): We all lost loved ones, relatives, houses, jobs. I mean everything that we would call a normal everyday life, all of it is gone.

Scott Pelley: You shot a video in Mariupol. Why did you shoot it and what is on it?

Andrii Khludov (translated): I filmed the video to let people know what was really going on.

Khludov recorded the evidence somehow numb to the shells thundering in the distance.

It’s a tour of misery, blocks of shattered apartment buildings and craters on the land.

his partner, Hanna, said, “I had a nervous breakdown. Human beings are not prepared for things like this.”

Rostyslav, is 15—a young man who clothes himself in hope over experience.

Rostyslav (translated): Houses were hit by missiles, apartments, cars blown up. We had graves in our yards, a lot of graves.

Scott Pelley: Vladimir Putin says that he is liberating the people of Ukraine.

Odesa has had enough of liberation. This month, an oil terminal was destroyed. Then, on April 23rd, the day before Orthodox Easter, a missile blew a four-story hole through this apartment building on Korol’ova Street. Valeria Glodan and her 3-month-old daughter, Kira, were killed along with six others. 145 are homeless. Odesa’s mayor, Gennadiy Trukhanov, took us in so the world could see it, up close.

Gennadiy Trukhanov (translated): These are ordinary people in these apartments. They were preparing for Easter. Everyone cooking Easter cakes, cooking food. A family celebration.

Scott Pelley: Who would give this kind of order?

Gennadiy Trukhanov (translated): This could be done only by those who aren’t human. When I turn to God, I ask that he will enlighten Russian soldiers, Russian officers, so they will not lose their humanity. At least those who have not lost it already.

Through the weave of rebar, we noticed Lyudmyla. She and her kids weren’t home that morning, but her husband was.

Lyudmyla (translated): My husband was sitting right there, right behind you. And at the moment of the explosion, he got out through the window, but he was badly burned.

Andrey was burned, over 40% of his body.

Lyudmyla (translated): My husband will recover. All the money we had, burned. I don’t have anything left. But I have a lot of friends. And people help, so everything will be fine.

Optimism, scavenged from inadequate materials, seems to prevail in Odesa. This settlement on the Black Sea began nearly 3,000 years ago. Today, one and a half million people defy the Russians by simply going about their day—interrupted from time to time by sirens and a recorded voice — “dear citizens, take cover.”

Odesa’s port is closed. Which has cut off one of the world’s largest exporters of food. Ukraine, the size of Texas, is number four in corn and wheat, number one in sunflower oil. David Beasley told us half the wheat the world food programme needs worldwide is stuck in ukraine.

David Beasley: Ukraine is the breadbasket of the world. They grow enough food to feed 400 million people. Well, that’s gone. You’re already seeing fuel pricing spike, food pricing spike, cost of shipping spiking. It’s already creating havoc for the poorest of the poor around the world. But this is gonna affect not just the poorest of the poor. It’s gonna affect everybody.

In 2016, we were with them in South Sudan as they dropped food to villages cut off by monsoon rains.

The loss of that Ukrainian breadbasket may be felt around the world for years according to Arif Husein the WFP’s chief economist.

Arif Husain: This is the time for farmers to be out there planting corn.

Arif Husain: Right now. This is their time. And they are not. Why? Because farmers are soldiers. Why? Because there is not enough diesel. Look at wheat. Right now, in the ground is what is the winter wheat. It needs pesticides. It needs fertilizer. Same issues. No labor, no fuel, no machinery. Our estimates are between 30 to 50 percent will actually be harvested. Would that have an impact on the world? Hell yes, it will have an impact on the world.

David Beasley: We have to open up these ports. You, you’ve gotta open ’em up and we gotta protect ’em so that food can move in and out of this country for the rest of the world. It’s a humanitarian need, the world demands it, we have to have those ports open, we have to.

Scott Pelley: You seem to be suggesting that NATO warships would have to come into the Black Sea to secure the shipping out of the port.

David Beasley: I’m a humanitarian guy but it isn’t complicated. The world leaders are gonna have to come together somehow and figure out a way to protect these seaways. The ports have got to be opened up. So, whatever the world leaders need to do, I’ll leave that to them. But I know one thing, we’re running out of time.

Time and money. David Beasley told us his budget is short $10 billion worldwide because of the rising cost of fuel, food, shipping, all multiplied by COVID.

David Beasley: Scott, before Ukraine I was already cutting rations to millions of people around the world. We’ve already cut rations to over 8 million people down to 50%. Imagine telling your child, “I can only feed you half of what you need to have a healthy diet.”

Scott Pelley:  How do you prioritize?

David Beasley: So we’re taking food from the hungry children and giving it to the starving children. That’s what we’re doing right now.

For all the millions he’s reaching, even with half rations, Beasley is most worried about those who are likely starving in Russian-occupied Ukraine. He is personally negotiating with Russia for access.

David Beasley: I have written. I have called. I know the United Nations’ doing everything it can in general to give us the access because we are impartial. We’re neutral. And all we’re asking is, “Give us the access to reach the innocent victims of this war.”

Scott Pelley: But it is in the Russians’ interest to starve those people out.

David Beasley: Well, sure would appear so, wouldn’t it?

Food is now a weapon in this war. A restaurant cooking for the disaster relief organization, World Central Kitchen, was hit in an airstrike–wounding four. Sandbags shield a church basement. The emergency rations are down there and no one has confidence that the church isn’t a target. The Khludov family of Mariupol has no illusions about a ruthless enemy.

Scott Pelley: I wonder if you think your family has a future in Ukraine.

Andrii Khludov (translated): I would like Ukraine to destroy Russia to the ground. So this fascist state, for which there is no place in modern society, ceases to exist. I would like Ukraine, and all of us who live in it, to start building a new life, to build our new home.

We noticed something in the sandbags guarding the food supply, the bags themselves. Because they have no use for them now, the people of Odesa used sacks for food export. Bags meant for oats, and peas and spices are filled instead with sand—the barren harvest of war.

‘Ozark’ Boss, Jason Bateman and Laura Linney on Avoiding a “Junk Food” Ending and the “Choicefulness” of Final Episodes

Fri May 6 , 2022
When deciding how to end Ozark, showrunner, writer and EP Chris Mundy said he wanted to honor the critically acclaimed Netflix series’ past seasons by only throwing the kinds of dramatic curveballs the show has been known for. “I think the main thing was, we really wanted to be true […] 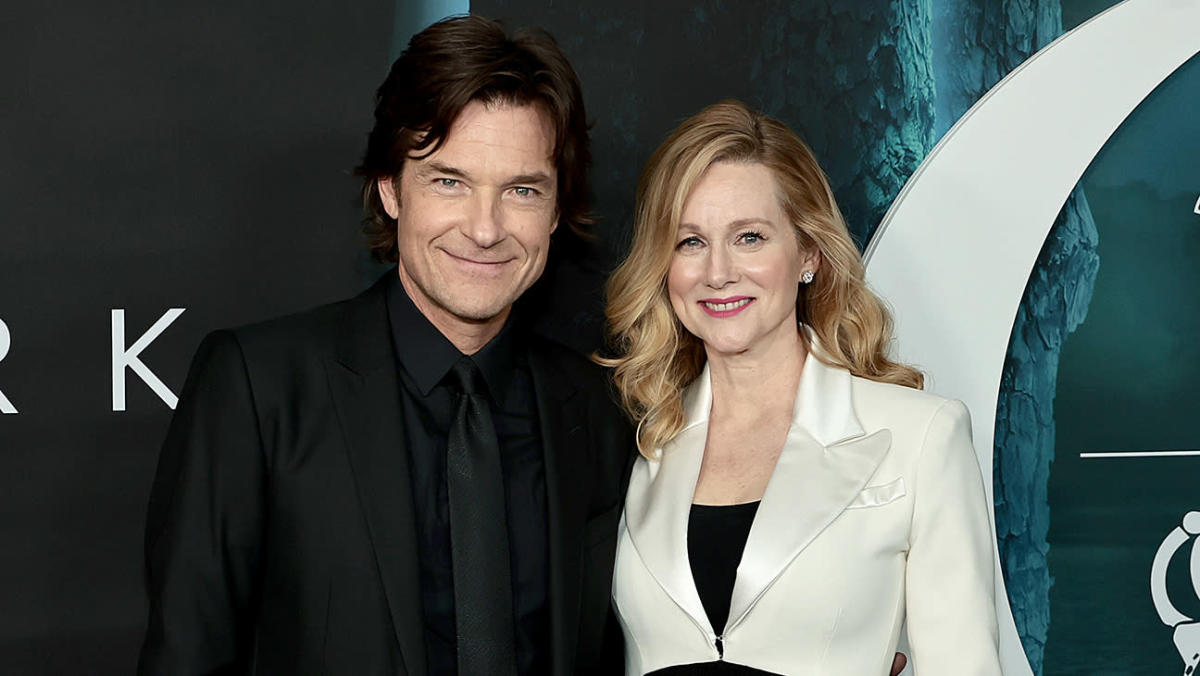