The gentle clink of glasses, the low hum of conversation, the soft lights and appetite-whetting scents.

All were sadly missed when restaurants around the world were forced to shut their doors in 2020 and 2021, the ovens cold and the owners and workers facing an uncertain future.

The World’s 50 Best Restaurant Awards — an event considered the Oscars of the fine dining world — was also obliged to take a hiatus last year, but it’s finally back, and the two eateries at the top of the list are both in Copenhagen.

The No.1 spot this year goes to what is perhaps the best known name in gastronomy: Noma. Danish chef René Redzepi’s three-Michelin star restaurant first opened in Copenhagen’s Christianshavn neighborhood in 2003 and first took the top slot in the World’s 50 Best Restaurants awards back in 2010.

A new rule introduced at the 2019 awards rendered previous winners of the top title ineligible for the list, but Noma was able to make the cut as it closed in 2016 then reopened in a new Copenhagen location two years later.

This fundamental change in the rules excludes New York’s Eleven Madison Park, The Fat Duck near London, Osteria Francescana in Modena, Italy, and the 2019 winner, Mirazur in Menton, France. These restaurants are now entered into a separate “Best of the Best” program, of which Noma is the newest member.

The fight for survival

Taking to the stage at the Flanders Meeting and Convention Center in Antwerp, Belgium, Redzepi recalled the life-changing experience of first winning the award 11 years ago: “In the wake of this victory, all dreams were seemingly open. It also gave us a chance to be a part — one part — of a transformation of an entire region’s food culture.”

He also reflected on the tough times faced by the industry. “If the pandemic has taught us anything, it’s how fragile our dreams can be, how incredibly grueling and difficult this industry can be,” he said.

“I want to recognize all the restaurants and industry people who have fought for survival. It feels a little weird to be standing on this stage knowing there are so many people still fighting.”

Ending on a hopeful note, he said of the Noma team, “We spent the last year and a half dreaming of something. We’re going to go build it now.”

Diners who can’t get a table at Noma can always try its Copenhagen neighbor Geranium, in second place, where head chef Rasmus Kofoed serves an adventurous seasonal menu which speaks to his love of sea-foraging. Ingredients on offer include squid, melted smoked lard and essence of yeast.

Elsewhere in western Europe, Spain’s showing this year was also solid. Larrabetzu’s Asador Etxebarri — where all dishes, even dessert, are flame-grilled — held onto third place, while chef Victor Arguinzoniz was voted by his peers as the winner of the Chefs’ Choice Award. Barcelona’s Disfrutar rose to No. 5, San Sebastian’s Mugaritz slipped down to No.14, while Madrid’s DiverXO made it to No. 20.

The Peruvian capital of Lima had two restaurants in the top 10: chefs Virgilio Martínez and Pía León’s Central, which climbed two spots to fourth place, and Maido at No.7, whose deal is Japanese-Peruvian fusion, with a highlight being the lucuma ice cream, topped with soy sauce and macambo foam.

In spite of Lima’s lauded restaurants and other spots from Mexico City to Singapore making the top 10, no restaurant outside Europe or North America has ever won the World’s 50 Best prize.

Since the competition’s inception in 2002, all 18 winners have come from Spain, the United States, the UK, Denmark, Italy and France.

Central’s Pía León not only celebrated holding onto the award for Best Restaurant in South America, but was also named World’s Best Female Chef. It’s an honor that attracts some controversy as critics see it as reinforcing the inequality that the event’s organizers say it helps address.

French-born Dominique Crenn, co-owner and chef of San Francisco’s Atelier Crenn (No. 48 on the list), won the Icon Award.

William Drew, director of content for The World’s 50 Best Restaurants, said, “Crenn is not just an outstanding chef and restaurateur, she is an example of someone who speaks truth to power in every aspect of her life — through her leadership, humanity and endless campaigning for social justice within as well as outside of the hospitality sphere.”

Slovenia’s Hiša Franko, headed up by Ana Roš, 2017’s recipient of the World’s Best Female Chef award, also had a good night — it jumped 17 places up the ranking to No. 21.

The Art of Hospitality Award went to Vienna’s Steirereck, at No. 12, where highlights might include sunflower and Jerusalem artichoke with lamb sweetbreads, or the signature char fish cooked tableside in beeswax with yellow carrot “pollen” and sour cream.

Boragó, in Santiago, Chile — No. 38 on the list — won the Sustainable Restaurant Award. It has its own biodynamic farm and a focus on hyper-local, “zero-kilometer”cooking.

Ikoyi, in London’s St. James’s, took home the One to Watch award. Headed up by childhood friends Jeremy Chan and Ire Hassan-Odukale, it serves up authentic West African flavors in a chic modern setting. 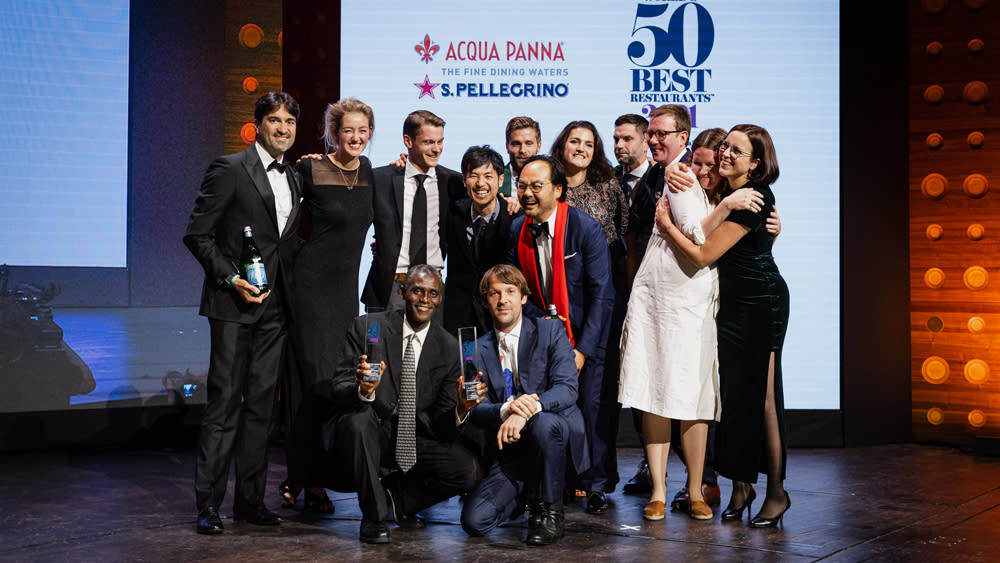