It is hard to overstate the contrast between previous winners such as Japanese chef Seiji Yamamoto, clad in stately whites at the three-Michelin-starred Nihonryori RyuGin in Tokyo, and 76-year-old Jay Fai, whose trademark ski goggles provide protection from sparks in her tiny Raan Jay Fai restaurant in the central district of Phra Nakhon.

On the weekend after the surprise announcement the food world’s new icon was still working hard in the hole-in-the-wall restaurant she has run for more than four decades, engulfed by flame as she stir-fried crab omelets and seafood noodles.

Customers packed six tables inside and four on the sidewalk, awaiting her delicious but slowly arriving dishes, all cooked personally by Jay Fai. Another dozen hopeful diners sat outside on plastic chairs, their names added to a waiting list for service. In the past, queues often stretched around the block, but COVID-19 has curtailed pilgrimages by fly-in foodies. (Restaurants have reopened, but Thailand’s borders remain closed.)

“I am happy, very happy,” Jay Fai said of the award, never lifting her gaze from the wok, stirring and searing, enveloped in the appetizing clouds that have mesmerized Bangkok and beyond. “I’m surprised and honored at the same time. This prestigious award is truly the reward of life for me … at the very last stage of my career,” she said, quickly adding: “I haven’t had a plan to retire yet. I feel greatly thankful to everyone who always support me, truly.” 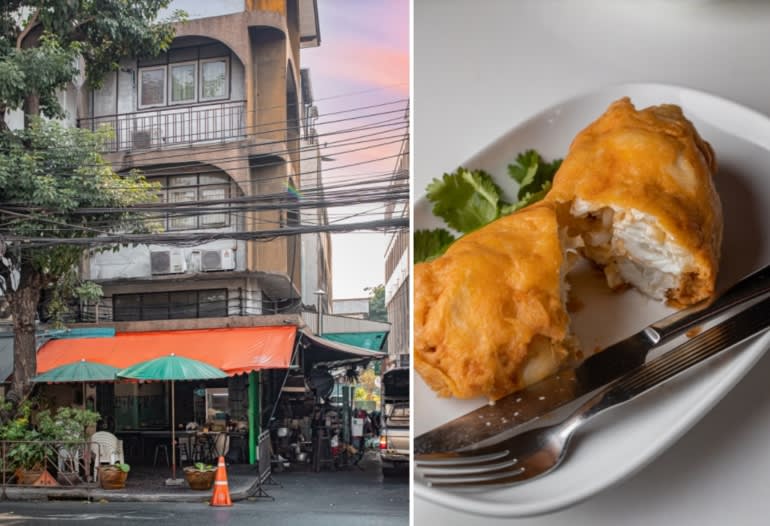 Jay Fai’s daughter, Yuwadee Junsuta, who helps at the restaurant and fields inquiries, said her mother remains a bundle of energy in the kitchen. Her working day lasts from 12 to 14 hours, and she rarely takes a break. “After being informed about the award, she was very happy, but went back to work,” she said. “Work has always been her priority.”

“She’s unique, one of a kind,” said Thitid Tassanakajohn, owner and chef at Bangkok’s upscale Le Du restaurant, which has one Michelin star and is ranked No. 8 on the Asia’s 50 Best Restaurants list, published annually by the U.K. company William Reed Business Media. Thitid regularly guides visiting chefs and jet-setting foodies on street food tours. “Everyone is always impressed with Jay Fai,” he added. “She’s very special, with her work, technique, and using the best ingredients. She’s in front of the flame every day, and she cooks each dish herself.”

“There’s no one else like her, and I’m so happy she received this recognition,” Thitid said. “It really shows that if you are true to your passion, and work hard, you can achieve your dream.”

Jay Fai joins lofty company. Last year’s winner of the Icon Award was the Japanese master chef Yoshihiro Murata, owner and chef at the three-Michelin-starred Kikunoi restaurant in Kyoto. Previously, Lifetime Achievement Awards went to well-known chefs such as Umberto Bombana in Hong Kong and Andre Chiang in Singapore. Jay Fai is the first woman to be honored, the first Thai, and the first to achieve Icon status without working in a restaurant that has appeared in the list of the region’s finest dining establishments. 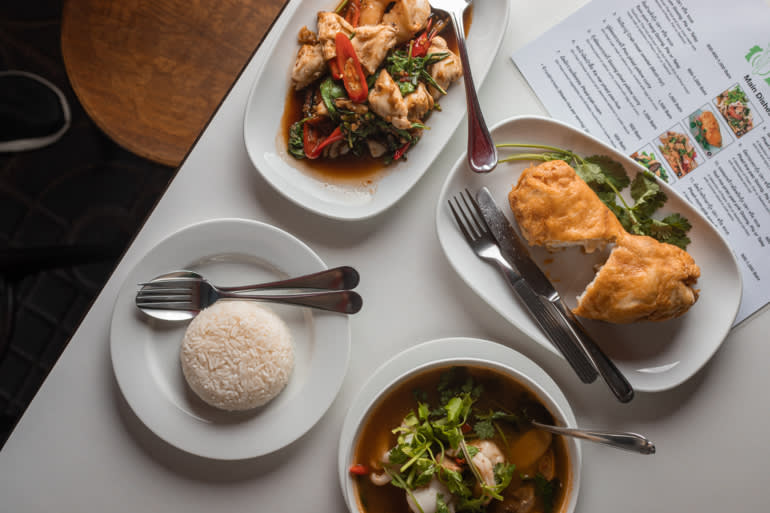 Some of the simple yet celebrated dishes at Raan Jay Fai. (Courtesy of Asia’s 50 Best Restaurants)

Drew acknowledged that Jay Fai’s award is a departure from previous winners. “But that’s a good thing,” he said, “because 50 Best endeavors to recognize excellence in dining of every form.” The award, like the annual list of top restaurants across Asia, is determined by votes from an anonymous mix of journalists, food experts and chefs based in every country in the region.

Street food has not previously figured in the 50 Best list, but has been gaining recognition in culinary circles, and Michelin has recently begun paying attention to street food in cities such as Singapore and Hong Kong. Thailand’s Michelin guides abound with alternatives to lavish fine dining, with only 28 starred establishments among nearly 300 restaurants in the 2021 guide. The vast majority fall into Michelin’s lesser categories of Bib Gourmand or Michelin Plate eateries. 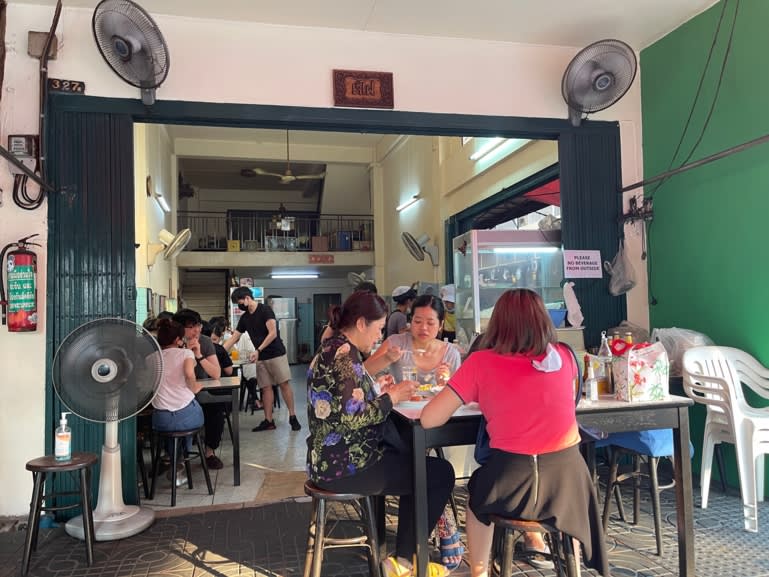 COVID-19 has reduced the size of the queues outside Raan Jay Fai, but there is never a shortage of customers. (Photo by Ron Gluckman)

Michelin caused a stir in food circles when it included Jay Fai among the country’s culinary stars in its initial guide to Thailand in 2018, in which her restaurant was awarded one star. Jay Fai was unquestionably the Cinderella star of those awards, but she nearly skipped the gala ball.

“Someone from Michelin kept calling me to invite me to the awards ceremony,” she said at the time, and she kept hanging up on what she assumed to be an irritating tire vendor. “Until very recently, I had no idea what Michelin stars were,” she added. “So I kept turning them down.”

The 2018 guide provided a late international platform for the septuagenarian chef, but she has since shone even brighter. Netflix featured her in its 2019 series “Street Food: Asia,” and her Instagram page (JayFaibangkok) has more than 75,000 followers, suggesting that the crowds clamoring for seats at her booked-out restaurant are likely to grow.

“The award will bring worldwide attention to both Jay Fai and Thai cuisine,” said Murata. “I think it’s a very good thing. I don’t think it’s good to spotlight only certain types of chefs.” Jay Fai onstage with Michael Ellis, then-international director of the Michelin Guides, in December 2017. Michelin caused a stir in food circles when it included her restaurant its initial guide to Thailand for 2018. (Photo by Ron Gluckman)

“I think she’s the embodiment of Bangkok’s street food culture — by no means the only great street food chef, but certainly the most high-profile. We’re celebrating that, and in the process Thai culinary culture, in the whole.”

After closing her restaurant for the day, Jay Fai reflected on what it all means. “I feel like all my hard work has paid off. All that I have been giving into cooking all my life. My commitment, dedication, determination and especially my love and passion,” she said.

“For me, cooking is a form of art where there is no ending,” she added. “I hope my story could inspire all the chefs and I hope you could learn something from it.”

Wed Mar 10 , 2021
NEW YORK (AP) — Restaurants devastated by the coronavirus outbreak are getting a lifeline from the pandemic relief package that’s awaiting final approval in the House. The bill passed by the Senate on Saturday a dds money to the Paycheck Protection Program and provides indirect help to small businesses in […]

who invented the computer