East London residents have claimed their flats could soon be worth less if a sushi restaurant is allowed to sell booze. Locals in Bow said they were worried that if the restaurant was given an alcohol licence, it would increase anti-social behaviour and crime in the neighbourhood.


Ona’s Bento & Sushi told the Local Democracy Reporting Service it would wait for the local council to make a decision. The sushi restaurant applied to Tower Hamlets Council to be allowed to sell alcoholic drinks from 11am to 9pm Monday to Saturday. The council met to consider the application on March 8.

Residents living near to the restaurant wrote to the council to express their concerns that more alcohol being sold in the East London town could damage the area. Six locals wrote a joint letter to Tower Hamlets Council calling for the licence to be rejected.

They said that they were happy with the restaurant as it is now, but added that: “Serving alcohol in addition to food is a considerable change of use which is likely to have both noise and nuisance implications to residents as well as the general public. All residents are reasonably concerned that granting another alcohol licence to the business of the commercial unit below can only result in a severe devaluation of four newly built and invested homes … There’s already a pub at the roundabout serving alcohol at late hours. Permitting a second alcohol licence in such a vicinity will create a hub, attracting crowds enjoying their late evenings out.”

The residents also added that more alcohol being sold in the area would make it noisy for them late into the night, and that it would make the surrounding streets messier and dangerous for children. A representative for Ona’s Bento & Sushi said that it would make sure that rules were in place to minimise noise and disruption for residents.

They said in a letter to the council: “The new sushi restaurant prepares high quality fresh dishes for customers to enjoy on the premises or for take away and is a small premises with seating for a maximum of 15 diners at any one time.” The representative added that: “I understand that customers will be seated enjoying a meal and will not just be drinking nor will there be any vertical drinking. Only a television will be used for sound and there will be no loud music that could disturb residents.”

The consultants also said the restaurant would make sure customers went home without making noise that would bother residents, and that there was plenty of public transport from Bow to help them get home without hanging around on the street.

Ona’s Bento & Sushi told the Local Democracy Reporting Service it did not want to add further comment, and that the owners would wait for the decision from the council on the alcohol licence. Tower Hamlets Council said it would announce its decision five working days after March 8.

Mon Mar 14 , 2022
Google is being sued by a Florida restaurant group alleging that the tech company has been setting up unauthorized pages to capture food orders rather than directing them to the restaurant’s own site. Google uses “bait-and-switch” tactics to get customers to place takeout or pickup orders through “new, unauthorized, and […] 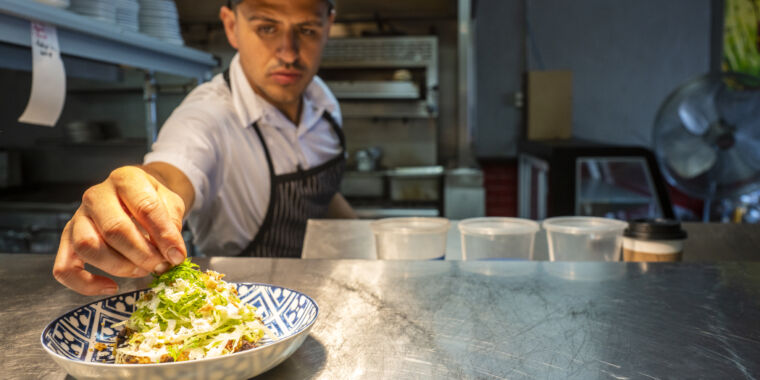 blue book value of my car