It’s going to be a deliciously action-packed weekend in the UAE capital.

The inaugural Middle East & North Africa’s 50 Best Restaurants list will be revealed in Abu Dhabi on February 7. This is the first time the World’s 50 Best Restaurants group is doing a list for the Mena region, and means that 50 outstanding restaurants across the countries in the region – from Bahrain and Iraq to Oman and Morocco – will be recognised during a grand ceremony that will take place at Conrad Abu Dhabi Etihad Towers.

“For some time now, we’ve wanted to extend and shine a spotlight on this part of the world because it is underrepresented,” says William Drew, director of content for the World’s 50 Best. “We think it has an amazing food scene, which is very diverse with a global influence, but also rich local heritage and tradition.”

Drew reveals the reason why Abu Dhabi was chosen as the location for the inaugural event. “We’ve been looking at different options where we might host this. Abu Dhabi is exciting in that it is fast-changing and fast-rising city, and also because of its food scene which is fast-developing,” he says.

“There has been an appetite within the government to develop food-based tourism with Abu Dhabi Culinary,” Drew continues. “The infrastructure and facilities are wonderful, and it has been very welcoming.”

While chefs and foodies alike will be waiting with bated breath to learn who picks up the top spots at the awards ceremony, there are more than just red-carpet events to look forward to over the next few days, as culinary experts from across the globe will descend upon Abu Dhabi. Many of them will take part in an open-to-the-public series of events, from February 4 to 8, in partnership with Abu Dhabi’s Department of Culture and Tourism.

© Provided by The National
A dish by German chef Tim Raue, who will be conducting a masterclass as part of the 50 Best Restaurant events week.


There will be dining events, masterclasses and the region’s first #50BestTalks, an event that brings “50 leading thinkers in the food sector to talk about how they can unite and collaborate better”. This will be held on February 5.

So what’s in it for you? While the list itself can be used as reference point for your next gastro-tourism holiday, you can also attend masterclasses and experiential meal experiences put together by chefs from the current and previous World’s 50 Best Restaurants lists.

Each masterclass will see chefs revealing the secrets behind their signature dishes in a live cooking experience, followed by tastings and a Q&A session. There’s also the option to buy a ticket to all three masterclasses on Friday, February 4, for Dh750.

One of the stars of Netflix’s Chef’s Table, Raue leans heavily on Japanese techniques and ingredient preparation, with minimal use of carbohydrates and heavy sauces. In this masterclass, he will show guests how to make his signature wasabi langoustine and Sanghachi pike perch.

Voted the World’s Best Female Chef 2021, Leon is the cook behind world-famous restaurants including Peru’s Central, which she runs with husband Virgilio Martinez, and Kjolle. This masterclass will showcase her country’s produce in Abu Dhabi.

Another star of Netflix’s Chef’s Table, Goldfarb worked in France, Spain, Australia, the UK and his native US before deciding to settle in Bali, Indonesia, to open Room 4 Dessert. For this session, Goldfarb will prepare and reveal the secrets behind three decadent desserts that mark a milestone in his career.

© Provided by The National
Chef Nie Dong has teamed up with 50 Best chef Tim Raue to create a collaborative eight-course menu available for one evening only.


One of the most hotly anticipated dinners of the 50 Best event week, the Dai Pai Dong team led by chef Dong, will team up with 50 Best chef Tim Raue to create a collaborative eight-course menu that can be experienced for one night only. Raue will add his signature langoustine, pike perch and famous duck soup dishes to Dong’s Cantonese cuisine, which includes barbecued meat and roast duck.

This experience begins with a boat ride that whisks guests away to the gorgeous Nurai Island where they will be treated to “game-changing” Peruvian cuisine by chef Leon. No menu has been revealed as of now, but there is the promise of “plenty of surprises and culinary delights”.

The mastermind behind Singaporean restaurant Odette, which has twice been given first place in the Asia’s 50 Best Restaurants list, French chef Julien Royer will be joining forces with one of the capital’s most popular restaurants to create a collaborative menu. Expect Asian ingredients with a French twist; think Normandy baron crab, black truffle tart and kampot pepper-crusted pigeon.

For the very finest in Japanese fusion, look no further than a special evening with Natsuko Shoji, Asia’s Best Pastry Chef 2020, and the chef-owner of restaurant Ete in Tokyo. Shoji is known for her intricate desserts – trained in the classical French style – and will host a one-off dining experience at Japanese restaurant Tori No Su at Conrad Abu Dhabi Etihad Towers.

Australian chef Dave Pynt is known for turning up the heat with his grilling skills that are best showcased in his restaurant Burnt Ends in Singapore, part of the World’s 50 Best Restaurants list 2021. Pynt will be cooking at Abu Dhabi’s BBQ Al Qasr at a one-off beachfront barbecue where he’ll expose meat and vegetables to smoke and fire. The meal ends with desserts by candlelight.

Fri Feb 4 , 2022
When chef John O’Brien and his wife, Cathy, opened Three Flags Tavern, they intended to create a simple neighborhood spot. But O’Brien couldn’t help himself, and instead of simple, Three Flags turned out fantastic. As a 30-year veteran of the St. Louis restaurant business (his résumé is filled with everything […] 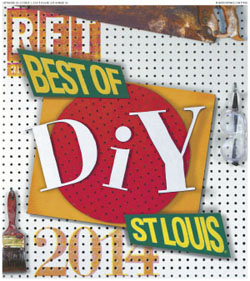